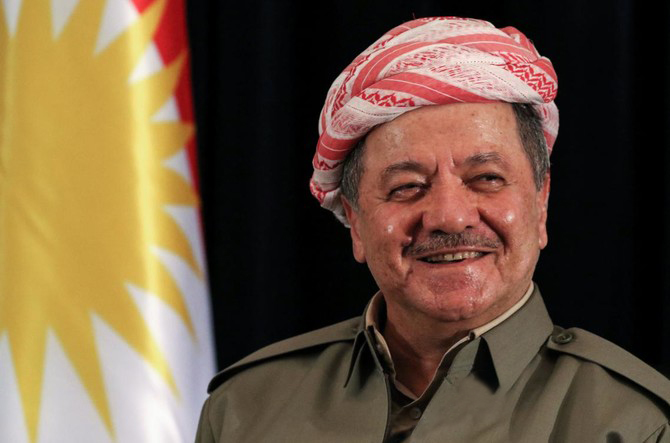 President Masoud Barzani served as President of the Kurdistan Region of Iraq (KRI) from 2005 to 2017. He is regarded as a key leader in the modern history of Kurdistan and recognized for his decades-long struggle to secure, defend, and preserve the rights of the people of Kurdistan.

Reflecting on the history of the KRI over the last several decades, President Barzani’s critical role in leading the uprising of 1991 and calling for immediate elections can be readily identified. His efforts helped secure the rights of the Kurdish people and religious components in the Iraqi Constitution of 2005. His defense of the KRI in the fight against ISIS and, more recently, his spearheading of KRI’s independence referendum in 2017 have been outstanding achievements.

Masoud Barzani joined the Peshmerga forces on May 20, 1962, following in the footsteps of other prominent members of his family, including Sheikh Abdulsalam Barzani I, Sheikh Muhammad Barzani, Sheikh Abdulsalam Barzani II, Sheikh Ahmad Barzani and Mustafa Barzani, all of whom were prominent and inspirational, even dominant, figures in the Kurdistan liberation movements throughout the region.

1991 Uprising and call for elections

After decades of struggle against successive Iraqi regimes, on May 3, 1988, the Iraqi Kurdistan Front, an alliance of eight of the main Kurdish political parties, was established to coordinate and unify Kurdish efforts against Saddam’s Regime. Both President Masoud Barzani and the late Idris Barzani had invested greatly throughout 1980s in the formation of the Front.

Throughout his career, President Barzani has remained a staunch supporter of creating and sustaining a democratic system where all citizens are treated equally, and their rights preserved.

Three years later, in 1991, President Barzani, in conjunction with other Kurdish leaders at the time, played a crucial role in the Kurdish uprising, which led to the ousting of Saddam’s forces from the KRI. On April 7, 1991, President Barzani led the Peshmerga in the defense of Kore against the attacking forces of the Iraqi regime, attempting to suppress the uprising and regain the territory under Kurdish control. The Battle of Kore ended in Iraq’s failure to further advance into the KRI and it is considered by historians to have been one of the most significant and consequential battles between the Kurds and the Iraqi government.

Throughout his career, President Barzani has remained a staunch supporter of creating and sustaining a democratic system where all citizens are treated equally, and their rights preserved. Addressing a large crowd of supporters on the eve of Newroz in 1991, in the town of Koya, President Barzani called for immediate elections in the KRI, paving the way for the process of democracy to gain momentum. For the first time in the KRI’s history free elections were held in 1992, leading to the formation of the Kurdistan Parliament and the Kurdistan Regional Government, which provided a strong foundation for the evolution of democratic process.

President Barzani and the former President of Iraq, Jalal Talabani, led the KRI and played a significant role in the removal of Saddam’s regime. Against the historical backdrop of the Kurdish struggle within the State of Iraq, President Barzani, along with other key Kurdish leaders, fought hard not only to secure the rights of the Kurds but also those of all ethnic and religious groups in Iraq.

In his deliberations at the Iraqi Governing Council, President Barzani emphasized the concept, and political system, of federalism, democracy and social justice. When the Law of 2004 dealing with the Administration for the State of Iraq for the Transitional Period was written, much of the key Kurdish demands were inserted, including Article 58, which later became Article 140 in the permanent Iraqi Constitution. President Barzani insisted that Kurdistan maintained its special status but also worked to ensure that all Iraqis could enjoy their rights as equal citizens under the law.

President Barzani insisted on the need to secure, through the constitution, the rights of Iraq’s religious and ethnic components. He argued that the cultural, political, and religious rights of all had to be guaranteed.

At one point in particular, President Barzani insisted on the need to secure, through the constitution, the rights of Iraq’s religious and ethnic components.
He argued that the cultural, political, and religious rights of all had to be guaranteed. To that end, he invited representatives of Iraq’s religious and ethnic components to attend the Iraqi Governing Council’s sessions to enable them to present their demands. In this, and other ways, he helped them secure their rights and protect their individual identities in the Constitution.

The fight against ISIS

Throughout 2014, the ISIS terror group advanced deep into Iraqi territory. In June, ISIS took control of the city of Mosul, the country’s second most populous city, as well as the oil refinery at Baiji, the largest in the north of the country. Almost overnight, ISIS became the most well-equipped, well-funded terrorist organization in the world. In a matter of weeks, ISIS changed the political geography in Iraq, controlling a third of Iraqi territory and committing genocide against the Yezidis and Christians in the Nineveh Plains. For a period, Kurdistan no longer shared a 1,050-kilometer border with the rest of Iraq, but with ISIS terrorists.

As the Commander-in-Chief of the Peshmerga Armed Forces, President Barzani was often at the front lines personally commanding his forces in the battles against ISIS.

For the next three years, as the Commander-in-Chief of the Peshmerga Armed Forces, President Barzani was often at the front lines personally commanding his forces in the battles against ISIS. During this period, the Peshmerga forces became a symbol of resistance against the cruelty of the terrorists. President Barzani was visited by a number of world leaders who collectively commended the crucial role of the Peshmerga forces in the existential clash with the terror group.

Although the idea of creating an independent Kurdistan has been a central component of the Kurdish movement for more than a century, the people of Kurdistan have not always opposed participating in the Iraqi State. After the fall of the dictator Saddam Hussein in 2003, Kurdistanis enthusiastically voted to ratify the new 2005 Iraqi Constitution. However, over the next decade, the Constitution was not fully implemented. Major articles of the constitution, which KRI leadership had negotiated hard to include, were never implemented. Most notably Article 140, which outlined a mechanism to resolve territorial disputes between the KRG and the federal government, setting a deadline of 2007 for the Article to be implemented. Despite Kurdish protests, this deadline came and went with hardly any movement from the federal government. In all, the federal government violated, or failed to implement, 55 of the 144 articles of the Iraqi Constitution.

Following the American withdrawal in 2011, relations between the Shia-led government in Baghdad and groups throughout the country deteriorated.
In February 2014, then Prime Minister Nouri al- Maliki unilaterally cut off the KRI’s share of the federal budget. Between 2014 and 2017, the rift between Erbil and Baghdad deepened further. The Kurdish leadership became increasingly concerned about the direction the country was being taken, which was very different to that envisioned for the post-Saddam era. Consequently, they called
on the international community, in vain, to mediate between the two sides and to insist on the implementation of the Iraqi Constitution in full.

It was in this context that President Barzani hosted the majority of the Kurdish political leaders on June 7, 2017, to discuss the future of Kurdistan. Much to the surprise of many, not only did the leaders agree to hold a referendum, they agreed on a date, September 25 of that year, only three months later. Kurdish leaders made it clear that the referendum was not an instant, unilateral declaration of independence. Rather, it was a peaceful and democratic form of expression that would be used in the upcoming negotiations with the federal government.

Although the announcement came as a surprise to Kurdistan’s partners in the United States and Europe, international leaders initially raised only minimal concerns. As the date approached, people in Kurdistan and around the world came out to demonstrate in favor of the referendum. Tens of thousands of people gathered in Duhok, Erbil, Slemani, Zakho, and other cities in the Kurdistan Region, filling stadiums beyond their capacity and pouring out into the streets. President Barzani, himself, campaigned and participated in a number of gatherings across the KRI in support of the referendum between June and September 2017.

Although the aftermath of the referendum brought about a new period of difficulty for Kurdistan, the results have left an indelible mark on the politics of Iraq. For the first time since the formation of the country, the people of Kurdistan had voiced their opinion. It was, and it will remain, etched in the history of the Middle East.

As public support grew for the referendum, other countries became increasingly vocal in their opposition. Officials from the US, Turkey, Iran, Germany, and others held meetings to try to discourage the KRG from holding its referendum. However, none offered credible alternatives or any solid commitment to help resolve the outstanding issues between Erbil and Baghdad.

In the absence of solutions or guarantees for the future of the KRI, and emboldened by the outpouring of public support, President Barzani decided to proceed with the referendum. On September 25, 2017, for the first time
in history, the people of the KRI were able to voice their opinion on whether they wanted to remain part of a federal Iraq or aspired to be independent. 93% of Kurdistanis voted to leave the Iraqi Federation, in a referendum that was as much about a longstanding historical aspiration as it was about the politics of the day.

Although the aftermath of the referendum brought about a new period of difficulty for Kurdistan, the results have left an indelible mark on the politics of Iraq. For the first time since the formation of the country, the people of Kurdistan had voiced their opinion. It was, and it will remain, etched in the history of the Middle East.